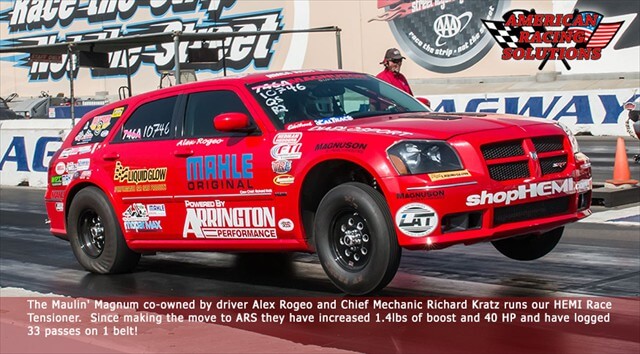 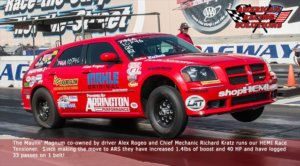 Fontana, CA – Alex Rogeo and her Liquid Glow MAHLE Arrington Performance team closed out their racing year at the NMCA West Mickey Thompson World Finals. Unfortunately, her car went into violent tire shake in the first round Sunday morning after a good qualifying effort that saw Alex start Sunday in 7th on the grid out of 27 cars in the Quick Street class.

After opening the season strongly with a win at Las Vegas and making the final 5 of 37 cars in the NMCA West Quick Street class in the first race of the season, the team struggled in the middle of the year with various gremlins. The team worked hard over the summer with their marketing partners and put all of the gremlins to rest.

“This year we started with a car that had major upgrades, a new, larger and more powerful Magnuson supercharged Arrington Performance 426 HEMI engine, a completely different transmission built by Westminster Performance Transmission and a totally new rearend,” said Alex. “It was awesome to open the year with the win at Mopars at the Strip and to go so many rounds at the opening to the NMCA West season. Then we ran into a lot of weird issues-and the issues were all related to factory parts that are still on the car, at no time did any of the systems or parts from our partners let us down-anyway these issues led to us having problems even getting into several races in the middle of the year.”

“It was a frustrating time for us, no doubt,” continued Alex. “But I’m so proud of my team, my crew chief Richard [Kratz], our volunteer crew members and our deeply dedicated partners, all of whom worked so hard over the summer and got this race car sorted out. The last two races of the year we finally got back to just racing, getting the tune right to provide good RTs and consistent ETs. It’s one thing to lose a race, this is tough sport, but it’s another thing when you can’t even compete. It felt good to just race again.”

Conditions were very unusual on race day. Practice Friday was warm and dry, Saturday a bit cooler and less dry. But Sunday dawned with rain, cool temperatures and very humid air. Crew chief, Richard Kratz, commented on the first round.

“Sunday was a tough morning, very unusual conditions for Southern California,” said Richard. “It rained on us on the way to the track. It was very cool and nearly 90% humidity. We were the very first class called to the lanes for eliminations. Right as they pulled the first pair into the waterbox it began to rain. We had a 35 minute rain delay and when I checked the track at about 15 minutes into the delay it was very slick. So I set the car up for a low traction track, to plant the tires hard. Well, my hat is off to the Auto Club Dragway track team, they turned a loose slick track into a super tight track in about 20 minutes. I watched Alex cut a good light and then three feet out of the beams the car went into the most violent tire shake it’s ever had. I felt terrible, it was completely my call and I guessed the wrong way. Everyone was in the same boat, no data for the conditions, so a lot of guessing-some guessed well, and others, like me, didn’t.”

“I’ve never experienced tire shake like that,” said Alex. “It shook so hard I couldn’t see, my vision was so blurred. I pedaled it, but at this level in racing you’re not going to recover 3/10ths of a second at the top end. We were longshots going in, sixth place in the points. We gave it our all, and I’m proud of our effort. I’d like to say congratulations to all of the winners and all of the champions. And especially to Marvin Roles, who won 50% of the races including this last one to win the Quick Street championship.”

The team will start 2017 with no major changes to the car. Both Alex and Richard say that they’re looking forward to starting next year with a sorted car, ready to run from the start. “It’s been several years since we didn’t make major steps in the off-season. It will be kind of strange starting the year with valid data and basically the same car from last year,” said Alex with a laugh.

The team is very grateful for all of its partners this year who contributed so much. “Our partners are like the Who’s Who of the performance aftermarket,” said Alex. “Arrington Performance and their online store shopHEMI.com who built this 900+ horsepower 426 HEMI engine, both American Racing Solutions who make the best belt tensioner on the market and Magnuson Superchargers who not only make the best superchargers you can buy but also helped us solve a multi-year problem we had with our belt system, MAHLE Aftermarket & MAHLE Motorsport pistons who provided critical piston, bearing and gasket parts in addition to tremendous support to the team, Manley Performance whose crank, rods and valves let us drop the hammer without worrying about durability, Hedman Hedders who used our car to prototype new bolt-on 2″ long tubes for not just our car but any high output power adder late model HEMI owners that want our kind of power.”

“Westminster Performance Transmission, Reid Racing, TCS Products, Coan Racing and B&M Racing and Performance who all contributed to one of the most bulletproof TH400 racing transmissions you can build. Strange Engineering and The Driveshaft Shop who make the differential, axle and driveshaft parts needed to survive launching a 4,100 pound car to 9.8 second quarter mile times for seasons at a time. LAT Oil, their engine oil, ATF and rearend lube let us run for years and still keep our mechanicals like new internally. Champion Spark Plugs, racers who know use Champion Spark Plugs for a good reason. Mickey Thompson Tires who provide tires that let us put all of the power and torque we can make to the ground. Weld Racing wheels, Impact Racing, Bell Racing, and RPM Rollbars, who all provide parts that are vital to safety.”

“AEM Electronics, who really opened a window into our car’s performance with their affordable and powerful data logging system. Mountain View Performance, the best race shop in the west and Big John’s Performance who not only helps us on the race car, but on our trailer and rig as well.”

“And lastly, to DragRacingOnline.com and MoparMax Magazine,” continued Alex. “Who have supported us since the beginning and opened so many doors for us. We can never say ‘Thank you’ enough to all of our wonderful, knowledgeable and supportive partners. We’ll see you all in 2017.”