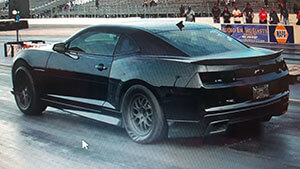 Last weekend I attended the NMCA West 5th race at the Auto Club Dragway located in Fontana, CA at the invitation of Alex “The Car Girl” Rogeo and Richard Kratz.  The purpose was to test our new Hemi Racing Belt Tensioner that we have developed and fine-tuned with some great feedback from Richard and his partners at Manguson Superchargers.  If you race any of the circuits out West then you know who Richard and Alex are.  For those who do not, let me tell you just a little about them.  Richard Kratz is the Crew Chief and Alex Rogeo is the Driver of the Maulin’ Magnum.  A 2007 Dodge Magnum that once served as Richard’s family car and over the last 6 years has turned into a sub 10 second heavily sponsored Sportsman drag racing car, which is now co-owned by the pair.  They are co-editors of MoparMax Magazine, Developers and co-owners of Liquid Glow, performance car care products and all around TERRIFIC people who I am honored to call friends.As the Editor-Publisher of MoparMax Magazine it is Richard’s job to have his ear to the ground about new products being developed for the Dodge and Chrysler world.  As crew chief he is always looking for a new product that could provide his team with a faster time.   Proving just how good he is at both jobs, Richard contacted me on August 23, 2016 because he heard that American Racing Solutions, LLC had developed an improved Racing Belt Tensioner for the HEMI Engine.  To put things into perspective we had literally only shipped our first prototype to an engine builder in Michigan just a couple of weeks earlier.  During our first conversation, Richard explained to me that he was hopeful that we would be able to solve his problem.  One year ago The Maulin’ Magnum had been outfitted with a brand new 426 stroker HEMI built by Arrington Performance located in Martinsville, VA as part of a sponsorship deal.  Thanks to this new engine and their Magnuson Supercharger, another sponsor, they entered this race season with a very competitive car running in the low 10’s.  Richard explained how well the entire package had been running but they had one problem, they have not been able to keep a belt on the car for very long.  Most of the time they would cut, shred or break a belt sometimes on a single pass down the track.  There were even times when Alex was unable to make a pass because the belt would break during the burnout.  When Richard asked me if our new tensioner would solve his problem my reply was, “this is exactly why we have designed it.”  Our shop has been building Racing Belt Tensioner for many years and we are race proven for the Mustang and the COPO world but this one for the HEMI was untested, until now.

The first step was to build a second prototype for Richard and ship it from NJ to CA in time for Richard to bring it to Magnuson on September 6.  Of course we were able to deliver and Richard and his partners at Magnuson installed a new belt configuration and replaced the stock belt tensioner with ours.  While I would love to say that it was an instant success a couple of modifications needed to be made and thanks to the Magnuson team our tensioner made it onto the engine and on Friday, September 8 the car was on the Dyno.  Three pulls on the Dyno produced thumbs up on for both the new belt design and the American Racing Solution HEMI Tensioner as you can see from the video published by Richard.

Even with a successful test on the Dyno, with feedback from Richard and team we learned that we could improve on the original version and committed to deliver the updated unit to Richard and Alex in time for their next race on September 16.   With very little time to make these changes it was back to the drawing board and within a week we were ready.  There was only one thing left to do.  I needed to fly our Racing Belt Tensioner to California and hand deliver it to Richard at the track in Fontana.

I met Richard and Alex at the Auto Club Dragway at 7:30 on Friday morning.  We waited in line, paid for our entry passes for the weekend and rolled the truck, trailer, Maulin’ Magnum and my rental car into the pits.  I stood back and watched the two of them go through the steps of off-loading the race car, unpacking their gear and transforming the trailer from hauler to a command center and home base.  By the way, I can’t tell you how nice it was to be in Southern California being outside from dawn until dusk for three straight days in temps that reached 104 (but it’s a dry heat) and having the refuge of an air conditioned trailer with the comforts of home to include running water.  Thanks guys!

Once the pit was set up it was time for Alex to register for racing and for Richard to prep the car.  First an oil change, then checking the bolts on the Hedman Hedders, also a sponsor, and next it was time to remove the prototype tensioner and install the new one.  I even got involved on this one as our spring provides 50 lbs. of torque and as a result it is nice to have a second pair of hands.  While we have cut a 1/2” square at the point of the tensioner arm to accommodate a larger breaker bar to manually load the spring so that the belt can be installed, there wasn’t enough space to get enough bite on it without any load at all.  Not a problem we anticipated that, so our design includes cut outs at the tip of the tensioner made for a 15mm open wrench.  I slid under the car and put the wrench on it and then realized something.  That size wrench is too short and I couldn’t get enough leverage to coil the spring enough so that Richard could slide the belt onto the pulley.  So we moved up to a large adjustable wrench and that was all we needed.  With the extra length I was able to smoothly clock the tensioner arm and the belt went on easily.  Final pre-race step was for Alex to put fuel in the tank and to take the Maulin’ Magnum on a warm up drive.  Checklist complete everyone was ready to go.

Friday was test and tune day and our Race Tensioner was ready to make its first pass.  I have to admit I was very exciting and yes a little bit nervous.  Sometime around noon we received our first call to the lanes and I watched Alex calmly bring the car out of the pits and down to the staging lanes while Richard and I followed in my rental.

The first pass was a success, the car ran solid numbers and of course back at the pit we were all anxious to look at the belt.  The tensioner looked great and the belt looked brand new.  Now to pull some data off the car.  With a big smile on his face Richard shared that they just recorded their highest boost and exceeded typical horse power output.  So far so good.  Over the course of the next 6 hours the Maulin’ Magnum made 7 more passes.  Each time we returned to the pits one item on the busy checklist was to take a look at the belt.   Pass after pass after pass there was no sign of any wear on the belt.  As Richard and Alex began to dial in the set-up, boost and HP continued to show increases.  Between rounds we would wait to be called for the next pass.  Several times during the day while relaxing in the trailer taking in the cool air and drinking lots of water Richard would say to me, I don’t know what to do, normally I would be replacing a belt right now.  With a huge grin on my face I said, “Problem Solved” and explained to Richard and Alex that this is how we came up with our name, American Racing Solutions.  We want our customers to know that we are an American company and we manufacture our products here in the USA.  We build products to support people who race or aspire to race.  Anyone who races knows that when you add horsepower and torque to a car there are stock components that fail.  This of course creates problems and our objective is to solve them.

One other benefit of not worrying about replacing belts is that being around Alex and Richard for three days, I received a high level education in drag racing, car set up and driver strategy.  You see I have always been a car enthusiast, which of course is why I started the company but I am not a racer.  But if you ask Alex, she has predicted that I will be racing and I’m not inclined to bet against her, again as over the course of the weekend I lost 3 friendly bets to her each for a beer one of which I am obligated to make good on at SEMA.

After three straight days of racing and zero issues with the belt and the belt tensioner Richard was kind enough to post the following message on Modern Mopar Forum on our behalf.

Quick update (I’m tired, weekend of racing in 104 degree heat). We set an all-time record with the ARS tensioner and new belt system. In three years we had never gone more than 16 laps on one belt, and the average was about 6 laps. After 18 passes this weekend, everything is still perfect. And we made 1.4 pounds more boost than we ever had this year since our new engine was installed, our prior best was 10.2 compared to 11.6 today (as measured by a fast sampling AEM AQ-1 data logger). Alex threw down a .004 package for one of her win lights today. Note that the 9.953 pass was with 101F temperature, the DA was 4,000 feet and car was 4090 pounds on the scales.

One note on this post, it was 2 AM on Monday Morning.  Keep in mind that Richard and Alex hand to trailer back home a 100 miles from Fontana and they got on the road at 6 PM on Sunday.  That’s not an easy ride in Southern California traffic.  Now you know why I started this article telling you how I am honored to call them both my friends.

American Racing Solutions is now shipping our new Racing Belt Tensioner built for 2004 and up 5.7, 6.1 and 6.4L HEMI.  As we like to say, it will be the last tensioner you will ever buy.  Visit our website at americanracingsolutions.com.